Briton says Spanish researchers are out by 200,000 years and have even got the wrong species 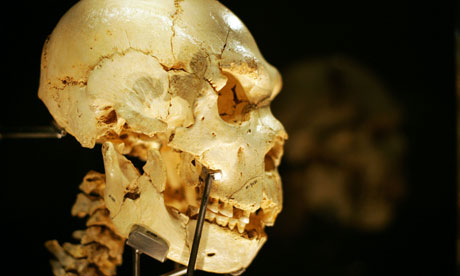 A skull from one of the bodies found in a pit in Spain. Photograph: Paul Hanna/Reuters
It is the world's biggest haul of human fossils and the most important palaeontology site in Europe: a subterranean chamber at the bottom of a 50ft shaft in the deepest recesses of the Atapuerca cavern in northern Spain. Dozens of ancient skeletons have been unearthed.

La Sima de los Huesos – the Pit of Bones – has been designated a Unesco world heritage site because of its importance to understanding evolution, and millions of euros, donated by the EU, have been spent constructing a museum of human antiquity in nearby Burgos.

But Britain's leading expert on human evolution, Professor Chris Stringer, of the Natural History Museum, has warned in the journal Evolutionary Anthropology that the team in charge of La Sima has got the ages of its fossils wrong by 200,000 years and has incorrectly identified the species of ancient humans found there.