Stonehenge up close: digital laser scan reveals secrets of the past 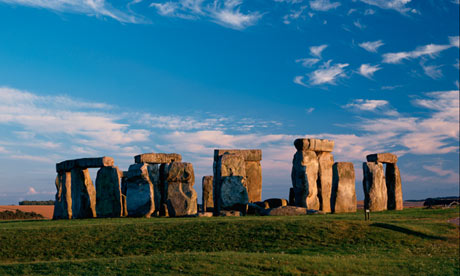 Stonehenge: a digital laser scan has revealed tool marks from 4,500 years ago, and graffiti made by Victorian visitors. Photograph: Yoshihiro Takada/Corbis
Like any corner-cutting modern builder, the ancient stonemasons who built Stonehenge lavished the most work and best materials where they would be first seen –shining in the last light of the setting winter solstice sun, or at dawn on the longest day.

The first complete 3D laser scan of the stone circle has also revealed tool marks made 4,500 years ago, scores of little axehead graffiti added when the enormous slabs were already 1,000 years old, and damage and graffiti contributed by Georgian and Victorian visitors.

The survey, carried out for English Heritage, exposes numerous details now invisible to the naked eye and will be used in displays for the long-awaited new visitor centre, due to open late next year. It shows the stones in unprecedented precision, from the double-decker bus height sarsens from Salisbury Plain that give the monument its unmistakable profile, to the smaller bluestones brought from west Wales by means still hotly debated, and the stumps of stones that have almost been destroyed.