Neolithic discovery: why Orkney is the centre of ancient Britain


Long before the Egyptians began the pyramids, Neolithic man built a vast temple complex at the top of what is now Scotland. Robin McKie visits the astonishing Ness of Brodgar 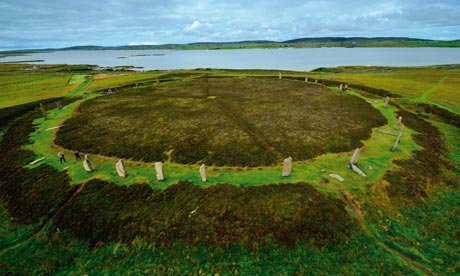 Circle of life: the Ring of Brodgar – a stone circle, or henge – is a World Heritage Site.
Photograph: Adam Stanford
Drive west from Orkney's capital, Kirkwall, and then head north on the narrow B9055 and you will reach a single stone monolith that guards the entrance to a spit of land known as the Ness of Brodgar. The promontory separates the island's two largest bodies of freshwater, the Loch of Stenness and the Loch of Harray. At their furthest edges, the lochs' peaty brown water laps against fields and hills that form a natural amphitheatre; a landscape peppered with giant rings of stone, chambered cairns, ancient villages and other archaeological riches.

This is the heartland of the Neolithic North, a bleak, mysterious place that has made Orkney a magnet for archaeologists, historians and other researchers. For decades they have tramped the island measuring and ex- cavating its great Stone Age sites. The land was surveyed, mapped and known until a recent chance discovery revealed that for all their attention, scientists had completely overlooked a Neolithic treasure that utterly eclipses all others on Orkney – and in the rest of Europe.