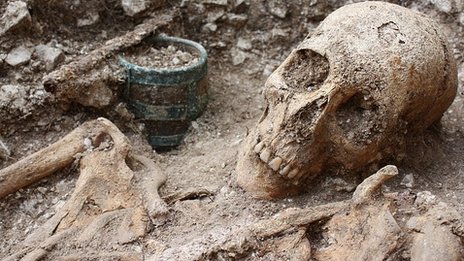 All the burials at the mound, which was under attack from burrowing badgers, were excavated by soldiers from The Rifles

Soldiers have unearthed 27 bodies during an archaeological dig on Salisbury Plain.

Troops from The Rifles, injured in Afghanistan, were excavating the 6th Century burial site at Barrow Clump, as part of a programme of rehabilitation.

The bodies, including Anglo-Saxon warriors, had been buried with a range of personal possessions.
Rifleman Mike Kelly said: "As a modern day warrior, unearthing the remains... fills me with overwhelming respect."