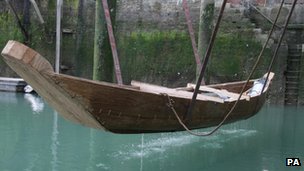 The maiden voyage of a replica Bronze Age boat made in Kent had to be aborted when it failed to stay afloat.

The vessel, which is called Boat 1550 BC, immediately began to take on water when it was lowered into Dover Harbour.

The boat is half the size of an original Bronze Age boat which was unearthed in Dover in 1992.

A Canterbury Christ Church University spokeswoman said: "It didn't go to plan so we had a bit of a naming ceremony instead."