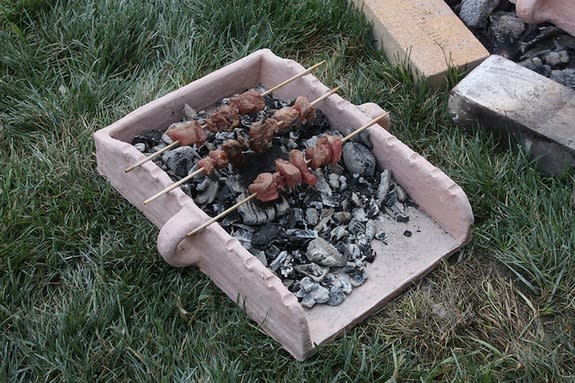 The ancient Mycenaeans have a reputation as palace-builders and warriors, but they were also quite sophisticated cooks. More than 3,000 years ago, they used portable grill pits to make souvlaki and non-stick pans to make bread, new cooking experiments suggest.
The Mycenaean civilization, which was the backdrop for Homer's "Odyssey" and "Iliad," thrived in Greece during the late Bronze Age from around 1700 B.C. until the society mysteriously collapsed around 1200 B.C. The Mycenaeans left behind amazing palaces and gold-littered tombs at sites like Pylos and Mycenae, but in these places, archaeologists also have found less glamorous artifacts, such as souvlaki trays and griddles made from gritty clays.
It wasn't clear how these two types of pans were used, said Julie Hruby of Dartmouth College, presenting her research at the Archaeological Institute of America's annual meeting here on Saturday (Jan. 4). [The 7 Most Mysterious Archaeological Finds on Earth]
Read the rest of this article...
Posted by David Beard MA, FSA, FSA Scot at 6:05 PM