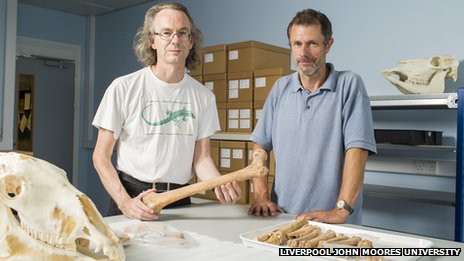 Archaeologists discovered the remains of humans and animals in the early 1990s but they have been dated following a study into the findings.


Archaeologists have dated bones found in the 1990s as the earliest known human remains from northern Britain.
Liverpool John Moores University and the University of Nottingham analysed a leg bone found in Cumbria and found it to be more than 10,000 years old.
The bone and other fragments were excavated from Kents Bank Cavern on the edge of Morecambe Bay and are stored at The Dock Museum in Barrow.
The results have been published in the Journal of Quaternary Science.
Read the rest of this article...
Posted by David Beard MA, FSA, FSA Scot at 11:35 AM