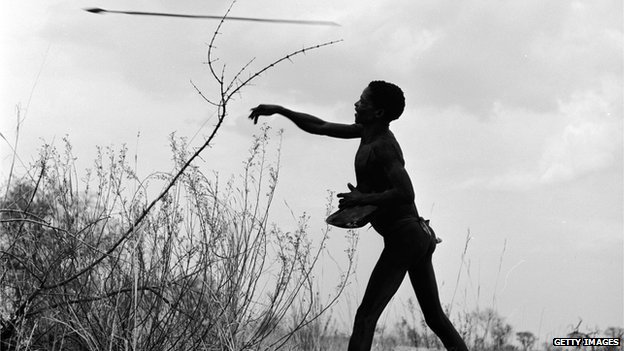 Throwing at high speeds is unique to humans and it helped Homo erectus to hunt two millions years ago, scientists have said


Early humans evolved to throw about two millions years ago, according to new research.
Anatomy changes found in the extinct species Homo erectus allowed this ability to evolve.
Archaeological evidence suggests hunting intensified during this time, which scientists now attribute to the ability to throw.
Researchers tell the journal Nature that the ability helped early hunters to evolve and migrate around the globe.
The ability to throw at very high speeds is unique to humans. We can throw much faster than our closest living relative - the chimpanzee - which can only reach speeds of 20mph compared to 90mph that many professional athletes can reach.
To investigate the evolutionary development of the ability to throw, scientists first had to understand the biomechanics of throwing today.
Read the rest of this article...
Posted by David Beard MA, FSA, FSA Scot at 4:40 PM