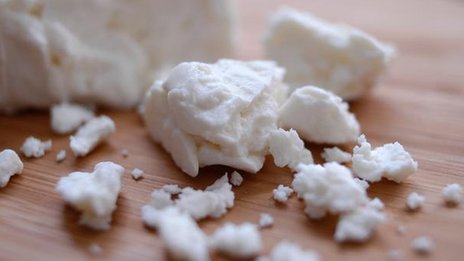 The cheese thought to have been made was likely to be a soft, cow's milk type


Scientists may be one step closer to uncovering the origins of cheese-making, as evidence thousands of years old has been uncovered. What would a Neolithic cheese have tasted like?

Truly an ancient art, no-one really knows exactly when humans began making cheese.
But now milk extracts have been identified on 34 perforated pottery vessels or "cheese-strainers", which date back 7,500 years that have been excavated in Poland.

It is unambiguous evidence for cheese-making in northern Europe during Neolithic times, scientists believe, and the findings have been published in the scientific journal Nature.

"We analysed some fragments of pottery from the region of Kuyavia [Poland] pierced with small holes that looked like modern cheese-strainers," says Melanie Salque, a postgraduate student at the University of Bristol's Department of Chemistry.