Buried by Vesuvius nearly 2,000 years ago, archaeologists at Herculaneum have excavated and carried out the first-ever full reconstruction of the timber roof of a Roman villa 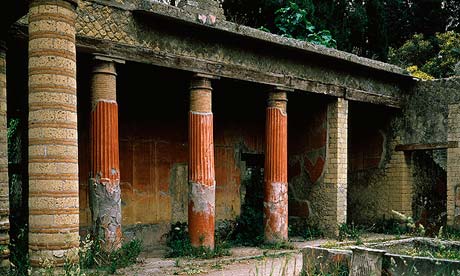 For almost two millennia, the piles of wood lay undisturbed and largely intact under layers of hardened volcanic material. Now, after three years of painstaking work, archaeologists at Herculaneum have not only excavated and preserved the pieces, but worked out how they fitted together, achieving the first-ever full reconstruction of the timberwork of a Roman roof.

With several dozen rooms, the House of the Telephus Relief was "top-level Roman real estate", said Andrew Wallace-Hadrill, the director of the Herculaneum Conservation Project (HCP). It was more of a palace or mansion, thought to have been built for Marcus Nonius Balbus, the Roman governor of Crete and part of modern-day Libya, whose ostentatious tomb was found nearby.

The most lavishly decorated part of the immense residence was a three-storey tower. On the top floor was a nine-metre high dining room with a coloured marble floor and walls, a suspended ceiling and a wrap-around terrace. It offered the owners and their dinner guests a heart-stopping view across the silver-blue Bay of Naples to the islands of Ischia and Capri.